Technology Waits for No Man (or Woman)

I've been cleaning up the blog a bit today, removing broken photo links and defunct gadgets, and generally marvelling at how much things have changed since I started this blog. When I took on the mantle of "The Cardboard Crafter," I was a stay-at-home-mom with a five-year-old just starting school and two-year-old twin babies trying to preserve my sanity through Any Means Necessary. Now my oldest is in middle school and the little ones have been known to steal my clothes... I'm back in school full-time myself pursuing a new career, but also about to start a job at the bottom of the totem pole earning half of what I did in my last position.

Not only has my life changed significantly (I'm like 3 jobs later), but so has technology and design. Everything is white and bright with clean lines, a little green here or there, and large, beautiful photos. And here I am in my little corner with my dingy brown cardboard and my granny doilies.

I have never been on the cutting edge of things (unless you count the fact that I started gaming on a Commodore 64 computer back in the 80's playing "Little Computer People," the precursor to Sims). I feel like I'm always playing catch-up, learning new things just behind the curve. I was not the first person to start a blog, join Facebook, get a smart phone, or send a Tweet. But, I do know how to do all of those things, thank you very much. And although I don't enter the Twitterverse very often, I have been paid admin to six different FB pages, plus the two I maintain for myself.

Old people think I'm amazing, young people think I'm awkward... I think with Google and girl power, I can do anything. It just might take me a bit longer to get the job done -- the first time. After that, I'm golden.
Posted by The Cardboard Crafter at 8:48 PM No comments:

Everything But (and including) the Kitchen Sink

I have been obsessed with miniatures for as long as I can remember, and a big part of that obsession has related to functional miniatures. If you have been reading this blog for any length of time, you know that I was inspired early on by books like "The Indian in the Cupboard" and Beatrix Potter's children's books, both of which feature tiny creatures living in tiny, functional houses. And while Beatrix Potter's forest creatures find humans to be a nuisance at best and generally hazardous to one's health, in "The Indian in the Cupboard" the little boy works diligently to help his tiny compatriot build a functional longhouse, feed himself, etc.

I've often imagined what it would be like if one of my dolls came to life or if I found a little mouse that could talk and wished to live as people do, how I would renovate my dollhouses to accommodate, what tiny food I would give them to eat, etc. Finding the tiny kitchen videos that other people have made online resonated with that part of me that still dreams of these things. And finding a toy stove that ACTUALLY WORKS has been a lot of fun.

So, of course, I want more. I have scoured the internet for a tiny refrigerator, but the smallest that I've found are still much too big for the scale of my Little Chef stove. So I decided I would make an icebox out of a small styrofoam cooler. This project is still in progress (waiting on materials), but I have completed it seven different ways in my head :)

I feel like I have made decent progress on the ice box. So, of course, I have started another project. Because of course you can't have a working kitchen without a sink.

In my head I designed a sink made from a repurposed fish tank pump and a Wolverine tin toy sink with tiny metal plumbing fixtures. However, I don't have any of those items, and the cheapest Wolverine toy sink I can find on eBay is $20, and it's very hard for me to spend money on myself.... so, I filed that away in the back of my head for later.

Then I found a tiny desk fountain.

And I bought it.

So, in my head I used the tiny pump inside this fountain to turn a Wolverine tin sink into a functional sink for my kitchen.....

And then I got impatient. And I opened the box. And I took a hammer to this fountain to get rid of the extraneous pieces and get to the guts of it.

And then I thought, okay. I will wait until I can order a Wolverine tin toy sink and put this in the bottom of it, and re-plumb it so the water can circulate....

And then I looked at the box this came in. And thought, "That's about the right size that a kitchen cabinet should be..."

And I did some things.

I cut out the back of the fountain box so that I could have an access panel for the plumbing. Then I found a little bowl that I thought might make a decent sink basin.

Once I measured and cut the hole for the drop-in basin, I of course used hot-glue to reinforce the box.

Then I got the bright idea that I would drill a hole in the plastic to fit the plumbing parts. Plumbing parts being pieces of a super silly adjustable straw that had rubber joints and plastic straw pieces that you could customize in all sorts of ways. Which I just happened to have lying around. Which also happened to fit the little fountain pump perfectly.


So, Plan B. I still used the little traitorous plastic salsa bowl for the sink basin, but I decided I would cover it, and the top of the sink, over with plaster. Even though the shape is wrong, I thought I might try to simulate one of those farmhouse sinks that has a white ceramic edge that comes down over the side of the cabinet. 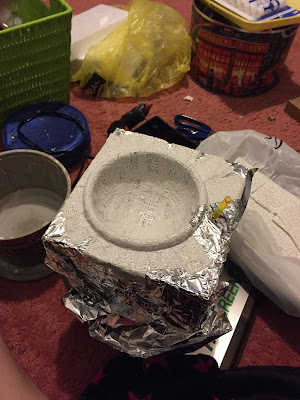 I used a layer of aluminum foil between the cardboard and the plaster in an effort to keep the cardboard dry and preserve it's structural integrity. I will have to cover over the plaster with another layer of something to smooth it out and make it waterproof (possibly the bondo I will use on the fridge?)

I'm hoping the drain hold I put in the plaster will be more successful than the one I tried to drill in the plastic. Cross your fingers! I'm totally improvising here. Any ideas or suggestions would be appreciated - I promise, I read all the comments, even i I don't always have a chance to respond. :)

See you next time in Cardboard Craftland!

Posted by The Cardboard Crafter at 12:14 PM No comments: